Sonic Worlds of the Between – between the moments in hush and thundering noise of everyday life. Between now and then, closeness and distance, between hearing and listening. Always open and full of life vibrations. – in an never-silent soundscape! – Danijela Oberhofer Tonkovic, curator)

Because of its beauty and fragility in the sense of time-baseness, ephemerality and no visible trace, but at the same time its ubiquity and power – we decided to utilize sound as a primary medium of art expression for discovering potentials (of auditability) of our surrounding. Detecting (new or existing) potentials of the (public) spaces that are somehow  “in-between”, we challenged our selected artists to setting them up in the way of telling a story about the city or even alternative realities.

During several months over 2019, especially during the residency time from April to June, our project development was marked by a creative force that was translated into multiple directions – collaborations, exchanges, network-opportunities, significant activities as well as powerful artworks!

The this-year Magic Carpets project was characterized by a lot of collaborations and solid collaboration-constructions! The Festival Heart of Noise (electronic sound festival from Innsbruck), our main partner, has played a very significant role in the whole proses.  Also important was the local support given by diverse networks by made of diverse local organizations – from the field of art & culture, media, community, as well as diverse creative centers, technology centers and entrepreneurial ecosystems (for example: p.m.k, Spiellokal für Alle, Fablab, Hackerspace – IT Syndikat, Verschubu Records, Klangspuren Schwaz, Werkstätte Wattens, Haus der Musik etc).They have complemented each other perfectly and, as such, represented a fruitful and creative basis for the selected artists and their work.

The artists in residence took position in the artistic-cultural context of Innsbruck and the neighborhood of the district of Wilten. Their concrete artistic work were developed on the interface between sound, society and technology, understood as vehicle for dialogue with the population of the city.

The organizations that represented the support-system were at the same time the communities that we approached and involved in various processes and activities during the residency. So, everything just kind of melted nicely together.

The main focus of our action and the deal with social dimensions and sound, imposed logically the use of modern technologies and science. Therefore we worked closely with organizations and their members (who also had artistic aspirations) from Hackerspace Insnbruck (IT – Syndikat), Fablab and Werkstäte Wattens.

All the artworks developed involved collective efforts!  As such, “Sonic Worlds of the Between”, symbolizes the possibility of collaborative exploration and development of the forms of social coexistence.

“Sonic Worlds of the Between” explored the “unheard” sonic dimension of the city. The artists were working with the collected sounds of the city and made audible what sometimes in everyday life is not heard!

“There is no such thing as an empty space or an empty time. There is always something to see, something to hear. In fact, try as we may to make a silence, we cannot.” ― John Cage

Vo Ezn aka Mika Motskobili is a multidisciplinary sound artist from Tbilisi, Georgia. Her previous work explored associative memory issues, social media algorithms and their implications and consequences on humans, disinformation, media manipulation and the formation of online political groupings.

Jiří Suchánek is a Czech sound and media artist, musician and multimedia experimenter focused on building interactive audio-light installations in natural or public spaces. His artistic approach is synthetic: In his work, he combines sound, light, sculpture, electronics and codes with carefully selected locations and explores the relationship between nature, technology and the durability of electronic media. At the center of his work is the sound, which is expanded or articulated by other media and unexpected social situations. Jiří Suchánek studied video-multimedia performance at the Faculty of Fine Arts of the Technical University of Brno, completed a residency at the STEIM Foundation in Amsterdam and was awarded a scholarship for the Institute of Sonology at the Royal Conservatoire in The Hague. Currently he teaches audio technology and history of sound art in Brno.

ludwig technique (also known as Johannes Payr) is a cross-media concept and performance artist. He describes himself as a „media-analytical universal dilettante“ who is active in various industries: from software development over normal construction sites to theater productions (both on and offstage) .A distinction between „art“ and „work“ is for him Therefore, according to his own statement „actually not possible.“ He prefers a holistic approach to life, the universe and the rest. Thematically, he often works with recursive systems (for example: feedback loops) such as the human body and the central nervous system.

Christian Schwarzer is an artist and craftsman from Fritzens, Tyrol who works with materials and spaces that allow to experiment with forms and interpersonal structures. The use of discarded parts and raw materials is just as much a part of his concepts as the involvement of the people in the environment and the mediation between like-minded people. His works deal with questions of regional development, the use of resources, the effects of everyday life and music and are mostly influenced by current happenings and moods.

On the interface between sound, society and technology Artist has developed great works and presented them in June:  OR-bits by Jiří Suchánek, Liminal Protocols by Mika Motskobili, Transmographon by ludwig technique and Christian Schwarzer, as well as their live performances and interventions at the Heart of Noise festival – TRAMatic Ride by Mika Motskobili, Klangbäume and Pulse 33 by Jiri Suchanek.

Three of our local artists from the Austrian MC artist pool – Matthias Krinzinger, Benjamin Tommasi, and David Prieth have joined international residencies in Zagreb, Prague and Tbilisi  in 2019 and experienced a similar joy abroad.

Interactive sound object filled with sounds recorded in the city is focused in a topic of circles, time and distance of human surrounding. Field-recordings created during the Jiris workshop “Sonic Map of the City” are the main sonic material for the object. Each imaginary orbit consists of sound recorded in proportional distance from selected installation space -– one sound in close, second sound 10m far away, third sound 100m away… 2 km far away. The sonic structure is open to creative collaboration of visitors. “Discovering new principle of interaction and controlling the sound is important part of the project. Understanding the question where I stand what is around me and what am I doing here is the crucial part of the Or-bitsinstallation” – Jiri Suchanek.

Liminal Protocols is a site-specific interactive sound installation, which taps into the multi layered circumstances pertinent to the gradual demise of Frauenanger Spielplatz (former children’s playground and park area) . The park territory is rendered as a sensory area, where field recordings of various other parks of Innsbruck are transported and the volume and complexity of the sound layers increase incrementally as more people enter the park. The installation attempts to represent possible alternative realities for the area through sound and collective effort via attendance.

The Transmographon is an instrument that makes wave interactions visible. In its production many local workshops and communities were involved. This process symbolizes the possibility of joint exploration and development of different forms of human coexistence. The instrument is also an offer to other artists to participate in the exploration of synaesthetic forms of representation.

_ADITINAL WORKS for HEART OF NOISE:

Mika  had a life performance in a moving tram (titled TRAMatic Ride) which was based, for 90 %, on field recordings of the residency surroundings and her acoustic experience in Innsbruck.. Very skillfully, and with such refined sense for sound selection, she performed on her octotrack sound machine for 1 hour in the tram, which was driving from the urban city center of Innsbruck into rural mounting countryside.

Successful cooperation with the project Klangbäume within the Heart of Noise festival. Jiri has provided magical moments for the festival audience with his sound installation in the trees. While in Innsbruck, Jiří has created 18 channel algorithmic composition for the “Trees” installation (outdoor surround sound system in the trees) in front of Haus der Musik.

Audiovisual algorithmic (modular) installation, whichwas rearranged and exhibited during 4 day of Festival in the foyer of the Hause der Musik.

Final Artworks works were presented within Wiltener Kultursommer on 6 June and subsequently at the Heart of Noise Festival from 7 to 9 June. The presentations were complemented by a series of events and workshops.

The MAGIC CARPETS project is co-funded by the EU as part of the Creative Europe program and supported by the city of Innsbruck and Land Tirol. 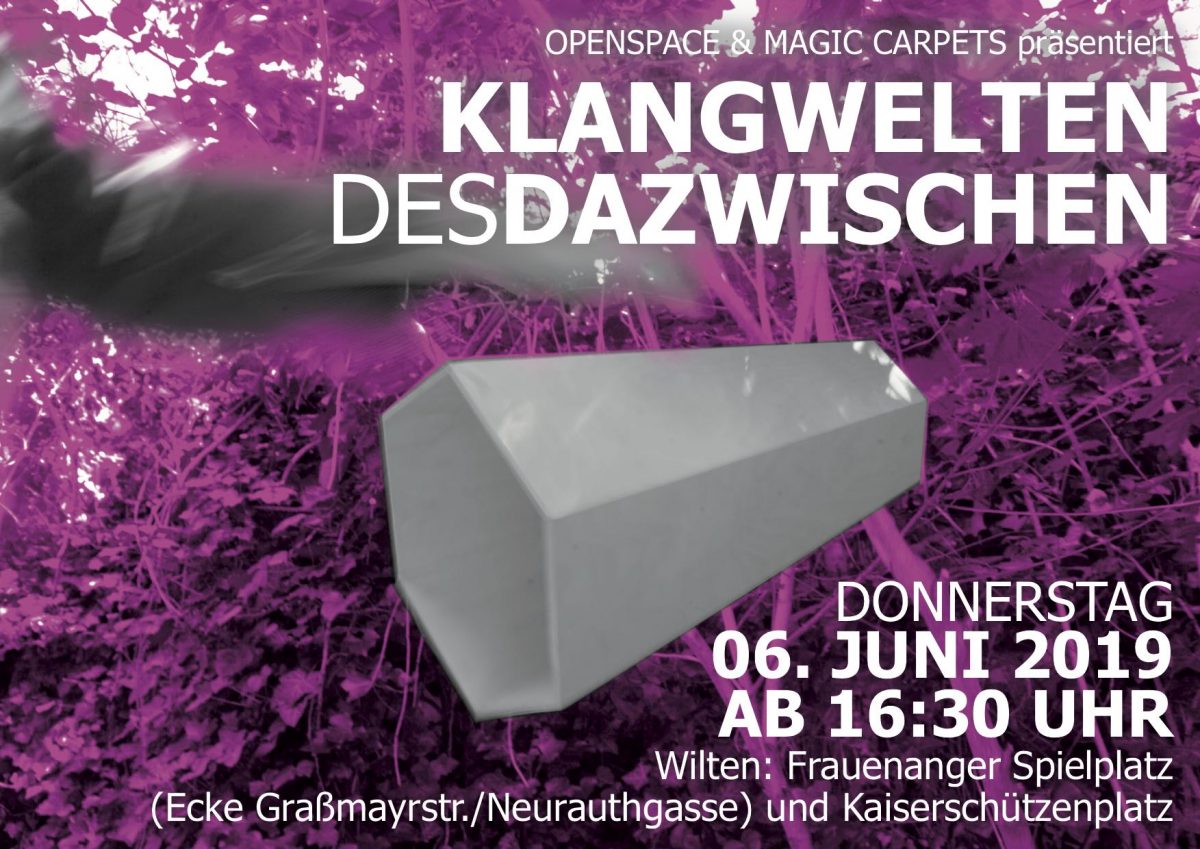 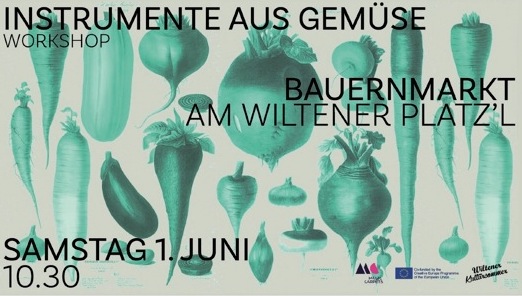 English version:
Workshop for children (10 years+) by Openspace.iinsbruck at the farmers market Wilten.
Registration by FB, email: danijela.tonkovic@gmail.com ore on the spot until 10.00 am at the Magic Carpets Workshop-stand!

Jürgen Berlakovich from the Vienna Vegetable Orchestra gives an introduction to the world of vegetable instruments. Learn by carving and drilling how to eg. build a carrot flute!

The workshop was created in cooperation with the „Wiltener Kultursommer“ and the local organization „Rund um’s Wiltener Platzl!“
The Magic Carpets project is funded by EU under the Creative Europe program and supported by the City of Innsbruck.

This message is only visible to admins.
Problem displaying Facebook posts. Backup cache in use.
Click to show error
Error: Error validating access token: The session has been invalidated because the user changed their password or Facebook has changed the session for security reasons. Type: OAuthException